Angelic features many significant characters, we have briefly shared the concepts and details of Iset the Mother and Daeva before. Now, it is time to talk about the others a bit.

This is going to be a quick and brief introduction. Much more information will be shared throughout this month.

So… Let’s meet the rest of the crew!

Odile is an infested human lady. When the infestation touches you, it takes only a couple of minutes until it captures your entire body and turns you into something else. This is the main problem with the infestation, it is phenomenally fast.

Before she got infested, she was a soprano and a ballerina, she lived in one of the outer space human colonies. 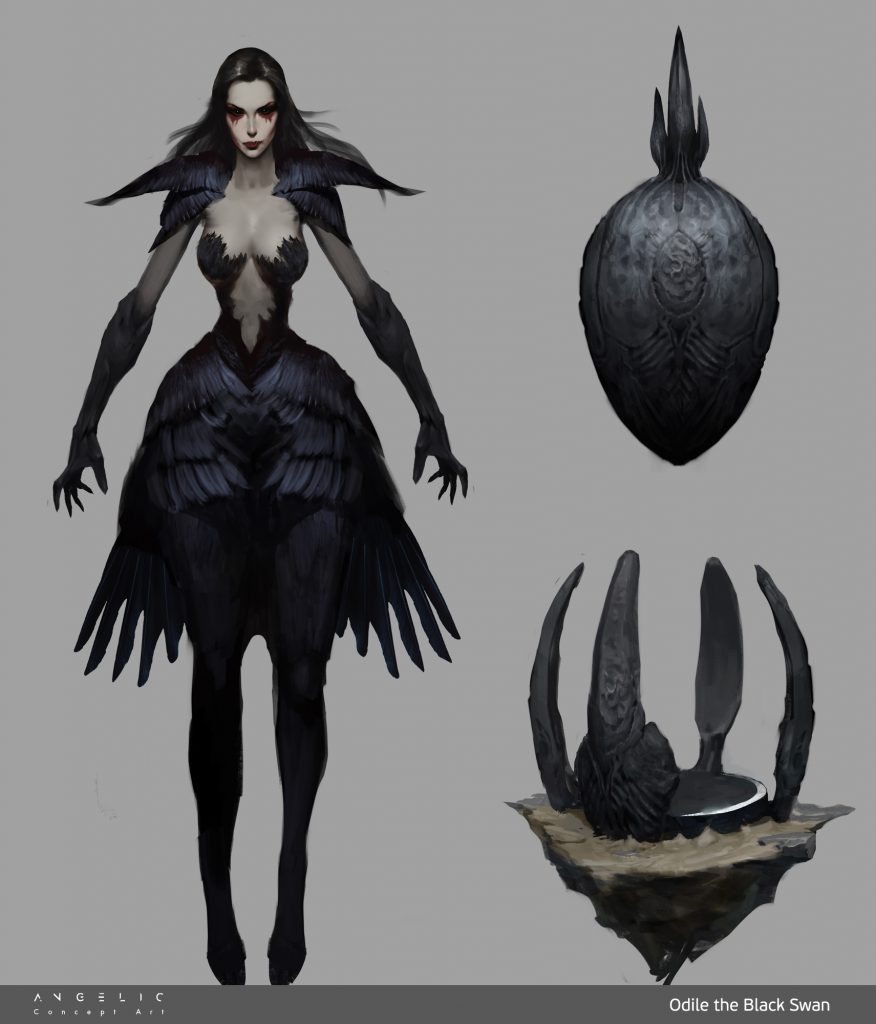 The thing is, if you are incredibly lucky, you can still control your body and keep your consciousness. You will not be the same person, but you will still be alive. Odile was one of the few lucky people in the universe who  have managed to do that. In fact, there are only a few known cases out of the billions of infected humans. She was remarkably lucky, you could say she won an astronomical lottery.

Odile is also a capable aisar caster. In other words, she is a sorceress as humans call them. She cannot speak, but it is unclear if that was her own decision or due to the infestation changing her. One will usually feel extremely uncomfortable when they meet the eyes with Odile’s, because it is hard to stand against her cold and piercing gaze. If you can bear it, however, you will notice that there is a deep, enigmatic pain and sorrow planted deep inside her looks.

Many thought that Seliné’s nickname, Nightingale, comes from her amazingly beautiful voice. The truth is, however, that she is a keen admirer of a great historic figure, Florence Nightingale, who lived during the 19th Century and considered to be the founding mother of the nursing profession. 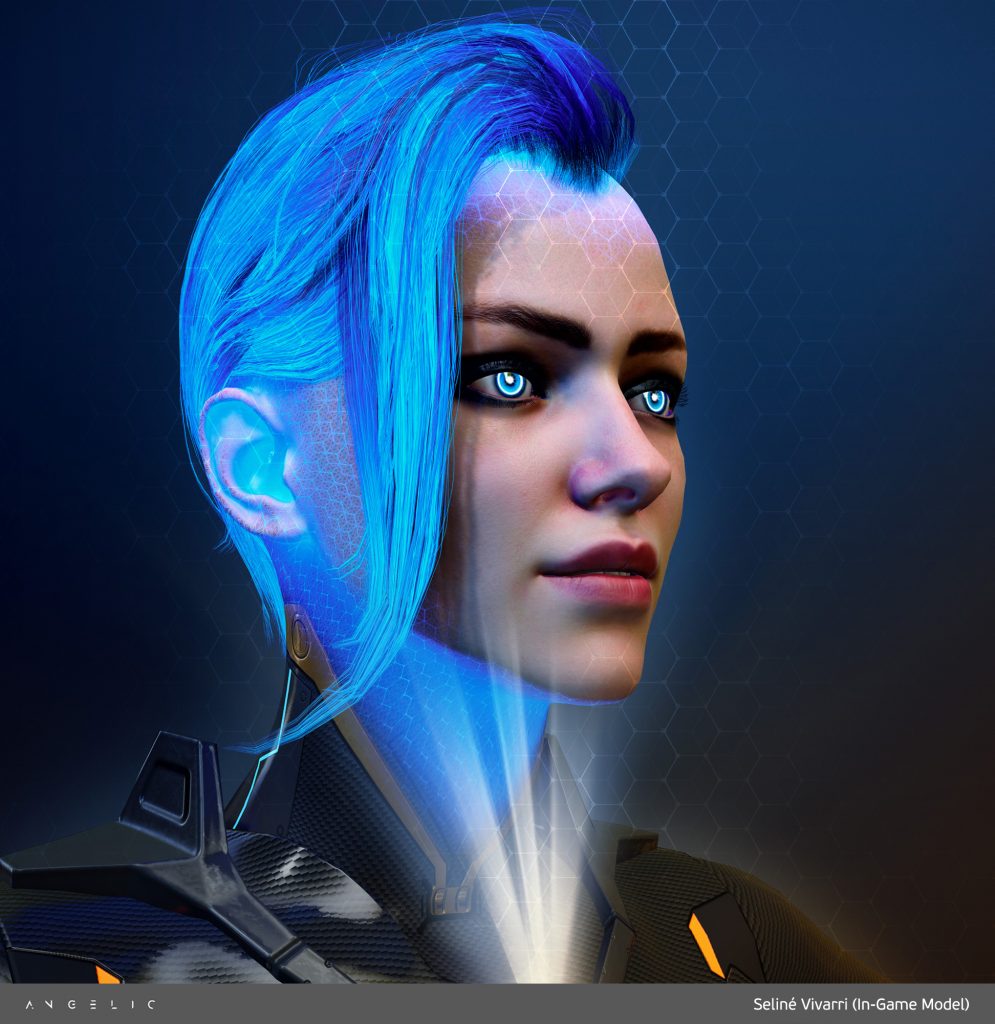 Seliné is a second-generation neo-human. She utilizes an enhanced version of a standard female neo-human body, with a cool holographic face projection feature.

Her main profession is being a supermedic. She is an expert doctor, practitioner, engineer and healer and capable of helping humans, eugenics, cybernetics, synths, neo-humans and even infested organisms. There are many supermedics in the ranks of neo-humans; but only Seliné (apart from Iset) can understand and heal physiology and anatomy of the infested.

She is one of the two heroes who has human origin. Technically, she is an eugenical (genetically crafted and modified super human) hero. 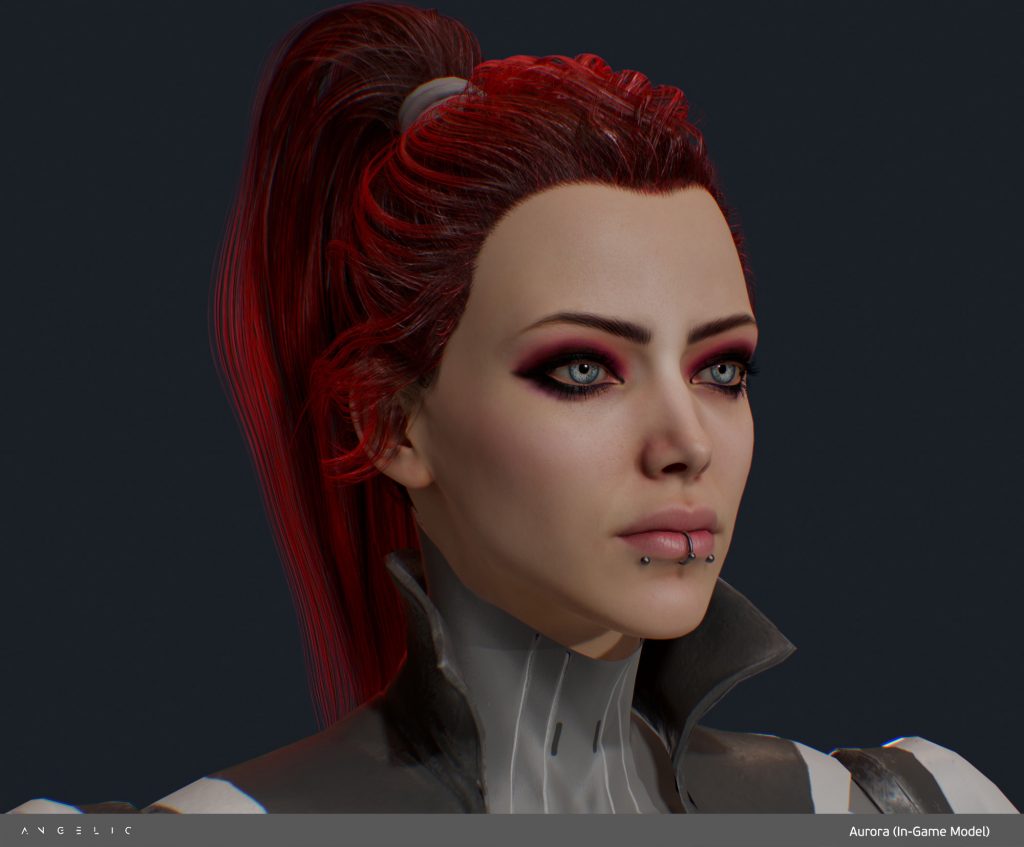 Eugenical people are both lucky and unlucky; because they have super abilities and talents but they also lack a family and a proper childhood. They are being created, raised and enhanced in eugenics farms and specifically crafted to serve corporations.

Aurora was able to fulfill her duties in 43 years, 7 years before the average service time threshold, as a hunter class tactical operations corporal. Therefore she gained the right of assigning herself a custom name, and after that, she left the service of corporations when she was just 54 years old. Eugenical humans can live hundreds of years and leaving the service of the corporations is considered to be a very risky move; because these people need a continuous and very expensive treatment to sustain their genetically modified bodies. These services sponsored by the corporations, as long as you remain in their service.

Regardless, she decided to leave the TacOps and joined *you*, her lover. She wanted to start a new life in deep space colonies. She had dreams, ideals…

You will learn what happens to her next when we launch the game.

Rumbrogon is one of the few aliens who is still alive. All known alien civilizations were annihilated by infestations. Somehow Rumbrogon managed to survive and maintain his body’s control even after he got infested. 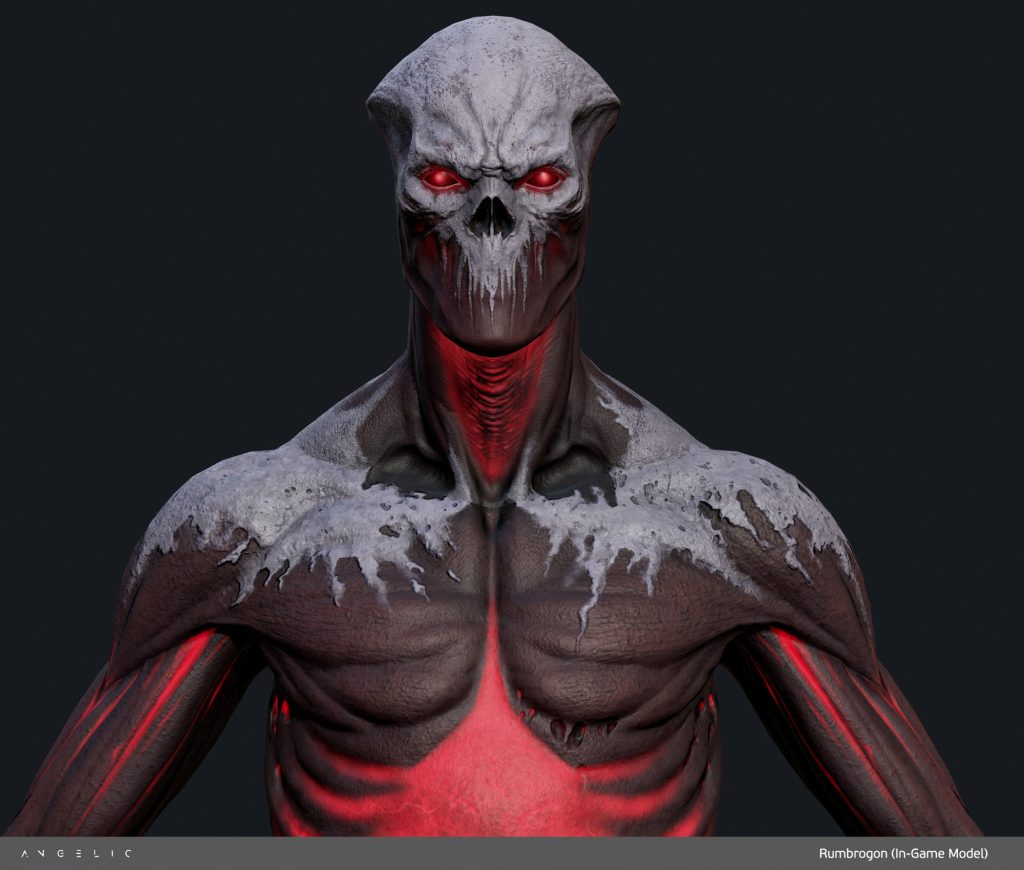 Daeva found Rumbrogon and Odile long ago, and even she had no idea how they met with each other, why they were together and who they were before the infestation. Iset quickly realized their importance and learned their common past. Yet she did not share all the pieces. Why? Maybe we will learn the reasons later.

Rumbrogon is a warrior class hero. He is a massive, fearless, and terrorizing melee fighter. He wields a giant two-handed sword; and thanks to his unreal regeneration skills (a side benefit of being an infested) he becomes a terrifying force.

Odile is so precious to him; to a point that in the past many times he risked his own life to protect his “queen”. He always follows her, watches her and serves her. Even Daeva was not able to dominate him. Rumbrogon helped Daeva and followed her, but only because Odile was helping Daeva.

Iset the Mother is the second being he respects and listens. It is unclear if that is because Odile also respects Iset, or simply because Rumbrogon admires and fears Iset.

Xander is a war veteran and a former stormtrooper of Hoshi Ryū and Celtic Triquetra corporations. He left the Earth when he was just a kid, followed his father and joined the military. For years he fought for the corporations, enhanced his body to be a better soldier and lost many friends. It was a hell of a journey.

Losing friends was devastating enough, but something else drove him off the domestic human space… 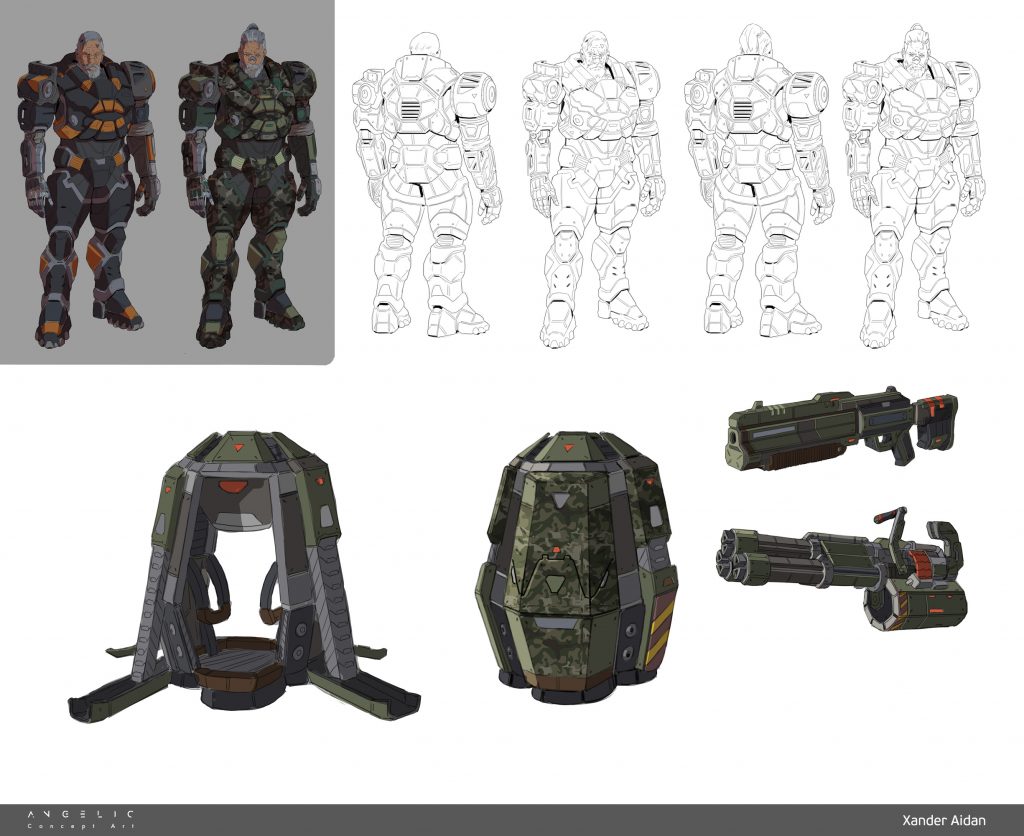 A decade ago, he lost his wife in a very tragic way. She was pregnant and killed brutally by extremist pirates. Corporations used that disastrous death for their propaganda. Instead of really helping him to get his revenge, corporations just abused his pain. That is how and when he decided to flee the military service and try his luck in outer space.

You cannot simply quit the service once you signed a contract with a mega corporation. Xander, however, did just that. Effectively he became a defector and criminal. He spent 3 years escaping from the domestic space, and along the way he met with Aurora and *you*, player.

Xander and Aurora are your dear friends. You all have the same thing in common: you had to escape from your past and left everything behind. You found each other, supported each other, and survived together in the harsh and unforgiving outer space theater.

But who are you? What is your name? Your appearance, past, story… So far we reviewed Iset the Mother, Daeva, Odile, Aurora, Rumbrogon, Seliné and Xander. There is one more major character left: You.

Thank you for reading and please join our Discord server, as well.

Next week we might have a surprise for you guys, stay tuned!

Ayşegül is a tech-savvy, full-stack marketing and communications leader with experience in tech and blockchain start-ups. As our Marketing and Communications Manager, she provides insight and expertise to our team to carefully represent the Angelic brand.

Debora is a 3D environment concept artist specializing in hard surface and environment designs. She is highly skilled in 3D and 2D with software expertise in Fusion360, ZBrush, 3ds Max, Octane, and Photoshop. Debora uses her magic to create detailed and immersive environments for the Angelic universe.

A 3D character artist with over a decade of experience in the gaming industry, Girish uses his outstanding skillset to bring the characters of Angelic to life.

Karena is our Senior Growth Manager. She uses her FinTech industry expertise and deep knowledge of the blockchain and cryptocurrencies together with skills in operations, growth tracking, project management, and communication to further the brand of Angelic.

Our audio maestro, Gunes, has a unique technical skillset (he is actually an Audio programmer, too) on top of his artistic (audiophiliac) abilities. He worked for Havelsan and Taleworlds Entertainment and nowadays composes epic scores for Angelic, so you all further immerse yourself in the dark and unforgiving universe of ours

Martin is a magician when it comes to engineering proper C++ codes (to be honest, he is brutally systematic so good luck if you are working with him and writing dirty codes!), he is an expert of Unreal Engine and worked for Crytek Istanbul and Frankfurt.

Another industry veteran, Ferhad, has been in the game development scene since 1994. His first company, Aneiva Inc. developed one of the first 360 high-res environments in 90s, and he managed large production teams at Midway Networks, Blue Genie, Céidot Game Studios and Koç Sistem. 25+ years of technology business, game development, VR and interactive software experience!

Emre worked for Oculus, designed environments, and has a solid experience on VR, PC and Console projects. He also worked for Realworld One and Valkyrie Entertainment, and now works as concept artist at KitBash3D as well.

Emek is not just an art director, he is a technical art director, meaning he has an excellent knowledge of implementing the optimal solutions into the art pipeline with best artistic approaches. He has launched 1 PC and Xbox, 2 casual, 10+ hypercasual, 2 PC VR games so far and was art director at Nowhere Studios, Lightstorm, No-Pact, Teleporter VR and Hero Games.

Petar is another industry veteran at our team and was the lead programmer of the original Far Cry at Crytek. He also worked for Genuine Games, LLC (50 Cent: Bulletproof) and Bungie (Halo 3: ODST) as lead programmer. Since 2011 he has been leading KAMAi Media.

Erkan founded Céidot Game Studios back in 2004, and developed 10 titles: Mostly strategy and RPG hybrids. Major games were Sovereign Symphony, Umaykut (which was acquired by Peak Games) and Céiron Wars. Erkan also worked for Crytek as Publishing producer and Director of Game Operations. He assisted Logic Artists to open a studio in Istanbul. He is lecturing at Bahcesehir University and mentoring game design master program at Istanbul Technical University.

Erkan was a representative and investment specialist at a US based fund under J.P.Morgan Chase&Co. and still mentoring various investment funds, accelerator programs and incubation centers.